Voting Members are entitled to receive notice of, attend and vote at general meetings. Membership as a Voting Member shall be open to all Golf Clubs within the County of Devon whose constitution and rules:

1.1.1.2 give control to its members or a committee thereof for the handicapping of its members in accordance with the National Handicapping Scheme in force from time to time;

1.1.1.3 undertake that any golfing events organised by the Club shall comply with the Rules of Amateur  status laid down by R & A Rules Limited and that such Rules of Amateur status shall be applied and form a condition of entry to any such events;

1.1.1.4 conform to, are bound by and accept the Articles, objects, rules and regulations of Devon Golf and of England Golf.

Non-Voting Members are not entitled to receive notice of, attend or vote at general meetings but agree to recognise the Rules of Golf as prescribed by R & A Rules Limited and agree to conform to, be bound by and accept the Articles, objectives, rules and regulations of Devon Golf and of England Golf and shall consist of the following:

1.3     Applications for admission to membership shall be sent to the Operations Manager who shall refer any such application to the Board which shall have the power to admit the applicant under Article 28.

1.5     Honorary Members shall be nominated by the Board for approval at an annual general meeting.

1.6     A Member Club may withdraw from membership of the Company by giving notice thereof to the Operations Manager on or before 31 December in any year failing which such Member Club shall be liable to pay the annual affiliation fee for the ensuing calendar year.

1.7     If the Board decides that a Member Club should be expelled the provisions of Article 30 shall apply.

1.9     An Honorary Member shall cease to hold such membership if his appointment is revoked by the Company in general meeting or if he resigns.  Honorary Membership may be withdrawn by the Board at any time on notice to the Member.

1.10   Affiliation fees are not refundable in whole or in part.

Committees shall be appointed by the Board to administer specific activities of the Company and shall report to and be responsible to the Board for the activities delegated to them.  The principal committees and their main responsibilities shall be:

The members of the Finance and General Purposes Committee shall be the Finance Director and such other persons as may be appointed by the Board or co-opted by the Committee with the approval of the Board.

4.2     The President, Vice President, Immediate Past President, Chairman, Operations Manager and Finance Director shall be given notice of the dates and times of all committee meetings and may attend and speak at such meetings if they so desire.

4.3     The quorum for a meeting of any committee shall be 51% of the members of such committee.

4.4     Committees shall provide copies of minutes of their meetings to the Board promptly after each meeting.

The Board shall convene an annual general meeting each year in accordance with Article 31.
In addition to the annual general meeting the Board shall convene at least one delegates meeting in each calendar year.  Member Clubs will be invited to send one delegate to such meeting representing their Playing Members.  The objective of the delegates meeting will be to update Member Clubs and playing members on the activities of the Company and on all issues relevant to Member Clubs and playing members.
The Company has representation at general meetings of England Golf, and meetings of the South Western Counties Golf Association

The Board shall ensure that Members comply with the objects set out in the Articles and with these Rules and that these Rules are enforced.
Subject to any variation or amendment made by the Board in general meeting the disciplinary procedures approved by the Board and announced from time to time shall apply.
The Board is authorised to impose such sanctions, penalties or punishment on any Member it deems necessary or appropriate provided they are consistent with and authorised by the disciplinary procedures.
In the event of an appeal against a sanction imposed by the Company the issue shall be referred to England Golf to be heard under England Golf’s appeals procedure.
Member Clubs shall comply with the Rules and disciplinary procedures of England Golf.

7. COMPETITIONS, MATCHES AND COURTESY OF COURSES

When requested by the Operations Manager or the Tournament Director, Member Clubs will, whenever possible, provide, at the daily rate of facility fee (if any) agreed at the annual general meeting each year, the facilities of the course and part of the clubhouse to Devon Golf at reasonable intervals for the purpose of playing its stroke play events and knockout extensions of those stroke play events. Member Clubs shall provide, as a courtesy such facilities to Devon Golf for the playing of its inter county matches.
Courtesy of the course for a county match shall include the use of the course on the day before the match for both the home and visiting teams to play a practice round starting between 3.00 pm and 4.30 pm or as agreed by the Member Club.
On the day of a County Match the first tee shall be closed preferably 45 minutes but not less than 30 minutes prior to the start of each round.
All competitions shall be played in accordance with the current Rules set by R & A Rules Limited and any local Rules of the Member Club on whose course the competition is being played.
Member Clubs shall provide copies of their Health & Safety Rules and requirements and of any relevant Health & Safety risk assessments for use when a county competition or match is to be played on that course.

Qualifications for the award of county colours shall be set by the Board. 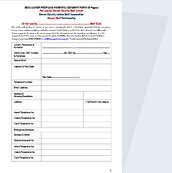